The sizzler made a big decision last night at the dinner table. He was sitting with his dad eating some delicious crock pot Mexican chicken, rice and beans. Something about the chicken got him thinking about, well, chickens. Now he does know that chicken comes from the fluffy, pecking birds we have owned. He knows that bacon is from a pig, but, there is a difference being knowing and really understanding. Last night he reached a level of understanding. He declared himself a vegetarian. He did not eat the chicken on his plate, thank you very much, however, he did ask for more rice with cheese on top.
I'm not surprised he has made this decision. He loves animals dearly and never wants to harm them. He has toyed with the idea many times, but then bacon or sausage would be served and he would happily dive in. Bacon is divinity didn't ya know?
Maybe because we have chickens in the house now it pushed him over the edge. I wonder what he will do when we visit In-N-Out burger again. I will let him know that they have other options like grilled cheese or animal fries. I want to honor his decision and help him be successful as a new vegetarian, even if it means more work for me. That's what Mama's do for their kiddos, right?
So today as we approach lunchtime he reminds me not to make him chicken nuggets (which he happily ate yesterday) because he would not be eating them. Sigh. Chicken nuggets are so easy to make! Then he asks what sausage is made of and what about steak. I tell him and he says, well, I can still eat those because 1) I love them too much, and 2) cows are annoying and I don't really like them. Hmmm, interesting. We've never owned a cow but our neighbors have some. One of them is particularly noisy and the sizzler doesn't like noisy things (funny, cuz he's quite noisy ;)
Then he starts to think about dinner. The sizzler really likes to eat. Friday night is taco night at our house so he says that he will have his tacos without the meat. I tell him that he can have beans instead. He likes that idea.
Good thing the boy likes pasta, tea & cookies. I'm going to have to research some good kid friendly vegetarian recipes. Anybody got some good ones? 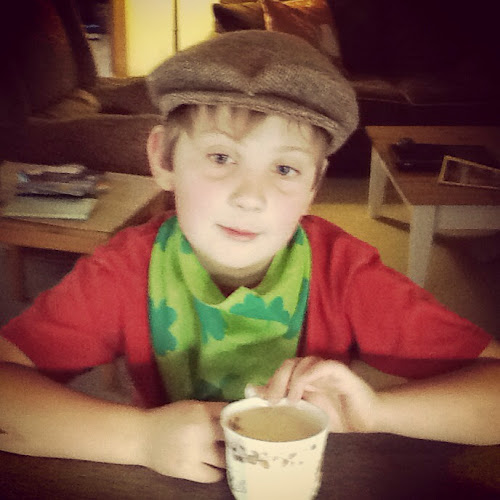 Awesome sites you will love!

Check out my other posts!

Welcome to my world! I'm so glad you stopped by.