There is chicken poop on my kitchen floor. I mention this to the sizzler and he says he dropped it there, by accident. So I say "well, if you dropped it there, why didn't you clean it up?"
His response: "I didn't know I dropped it there."
Really?!
Now, before you go judging me and my unclean house you must know that we have a new batch of baby chickens. Yep. We do. Five lovely little cheepers who eat and poop, a lot. 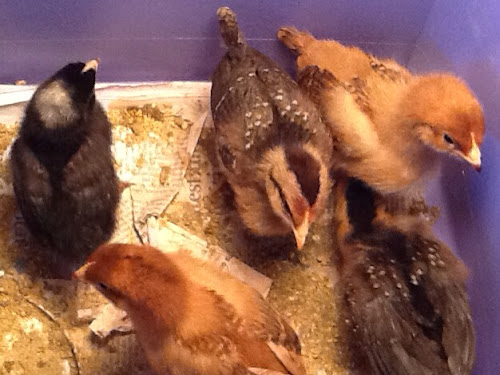 The fun part about getting our new babies is naming them. Our chickens are not for eating so they have to have a name! There's five in our family so we each got to name one. My sweet son named his little Araucana, Rosalina. I think that is a spectacular name for a chicken, don't you? El named hers Alice, Big Bubba named his Jed Dowell (after his friend, weird, I know, but it's better than the last time he named his Burnt Fries), the Skipper couldn't make up his mind but I think he's settled on Mr. Winkles. I named my precious baby, Lucille.
So, the other morning the sizzler and I were cuddling on the couch with our fuzzy friends and he had a great suggestion. He says "let's read some chicken stories!" Now those are lovely words to a bibliophile mama!
Yes! Go look for Chicken Sisters. Off he goes. Then I had a real proud mama moment. He brought back several stories along the theme of chickens, farms, etc. Oh, how I love it when things are thematic! And here's my boy picking out stories from our library on a theme. Sigh. Grin. 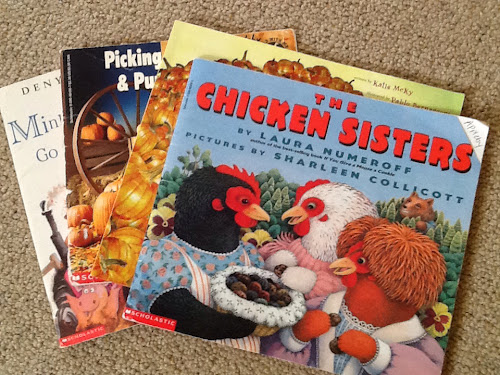 We took turns reading our chicken themed stories to our babies. The chicks were cuddled up in towels as we pet their heads. The sizzler and I snuggled under a cozy blanket. Pure bliss. 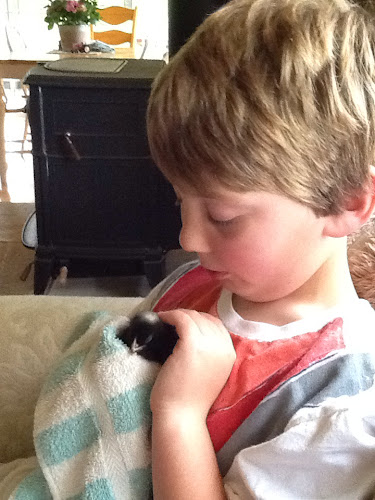 So how did the chicken poop get on my kitchen floor? Well, after this mornings chickee cuddle the sizzler went to dump the turd in the towel into the trash. I guess he missed.

Awesome sites you will love!

Check out my other posts!

Welcome to my world! I'm so glad you stopped by.